Canada’s Next Top Comic hails from Toronto and has a history of empathizing with stuffed animals. Meet Eric Andrews.

We might be the least-liked city in Canada, but we turn out some pretty funny people. Toronto (and surrounding area) natives Will Arnett, John Candy, Jim Carrey, Eugene Levy, Mike Meyers, Russell Peters, and comedy king-maker Lorne Michaels are all proof of this.

“Doing stand-up in Toronto can really open doors,” says the Bloorcourt Village resident. “It’s not really just a matter of who you know. If you are talented and you have the chance to get in front of producers, it will happen.”

This has been Andrews’ experience in his four years of performing in Toronto. He recently won a Canadian Comedy Award for Best Stand-up Newcomer, and was one of the Top 8 finalists in the “Great Canadian Laugh Off.” Today, Andrews is a regular at Yuk Yuks and has been featured on The Comedy Network, Much Music, Rogers TV, and Discovery Channel’s Prank Science.

Described on his Facebook page as “a clean cut and well-bred young man whose charm is an instant killer,” he’s the kind of nice-guy entertainer you want to root for. His style is “awkward” and sets are based on Andrews trying to “make sense” of what he describes as the “craziness in my head.”

“My style is different than most people,” Andrews explains. “I feel very weird. Maybe it’s because I am an only child and have an imaginative and creative mind.”

As an example, Andrews shares a story from his childhood in Brampton.

“I had 140 stuffed animals and a bunk bed. They would fill the lower bunk, and each night I would pick my 10 favourite to sleep with on the top bunk. However, sometimes I would feel bad, so I’d just sleep with them all in the lower bunk.”

Raised by a single mother after his parents split up, Andrews is close with both parents, who have been very supportive of his career, if not always on board with his humour.

“I was doing a big show and had invited my entire family. The set had some incest jokes in it, including one about being sexually attracted to my mother,” Andrews says. “It referenced the fact that I lived with her and may have had some sexual feelings. I looked out at the audience and spotted my mom after that joke. She wasn’t laughing.”

Even in light of this famous “know your audience” slip-up, Andrews has come a long way since his early days. His first stand-up performance could only be described as a flop.

“I got on stage, sat on the stool and looked straight at the light. It was all I could see. When you are on stage, and all you can see is that light and nobody is laughing, it is as if you are alone,” Andrews says. “It was the same feeling people describe when they are near death.”

So far he’s managed to avoid going gently toward the light and has survived the scene, quick to point out that there’s a lot of other talented up-and-comers in Toronto who have, too. The kind of sensitive soul who feels guilty about hurting the feelings of inanimate objects, Andrews is almost apologetic about his success, and reminds Toronto comics that there’s lots of success—and talent—to go around. 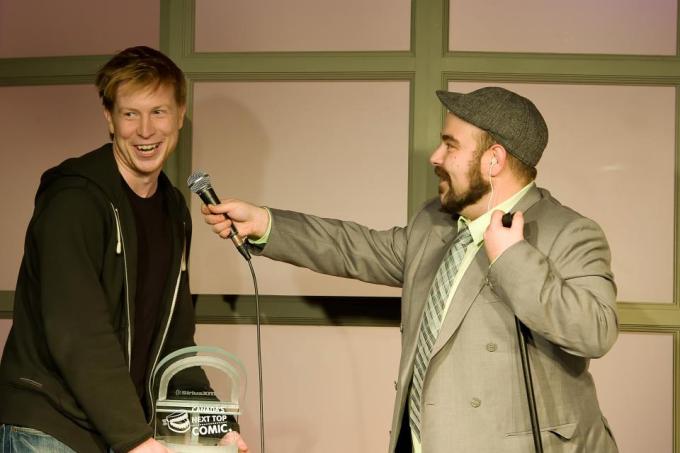 TORONTO, Nov. 16, 2011 /CNW/ – After months of auditioning some of the best comedic talent the country has to offer, SiriusXM Canada named Toronto, Ontario’s Eric Andrews Canada’s Next Top Comic 2011 at last night’s gala event at Yuk Yuk’s in Toronto. Not only does Andrews win bragging rights throughout the coming year, he takes home a cash prize of $10,000.

“I’m flabbergasted – just through the roof about winning,” said Eric Andrews. “I didn’t think I was going to win. All the comics who were in the finals were great and I really respect them all. I’d definitely like to thank my Mom and my girlfriend – they are tremendous – as well as Yuk Yuk’s for giving me the opportunity to become a better comic and most definitely to SiriusXM Canada for putting on an amazing competition and showcasing some of Canada’s top comics. I’m really looking forward to working with them in the future. But still I can’t believe I won!”

Over 700 comedic hopefuls entered the competition as SiriusXM criss-crossed the country in September.  Auditions were held in eight Canadian cities at Yuk Yuk’s Comedy Clubs, Rumors Comedy Club and Lafflines Comedy Club to locate some of the country’s top comedic talent.  Forty-five semi-finalists were selected before Canadians voted online for the 11 finalists who travelled to Toronto for the gala hosted by last year’s winner Matt O’Brien.

“What a great night for Canadian comedy,” said Jeff Leake, Programming Director, SiriusXM Canada.  “Canada’s Next Top Comic proves there are a lot of aspiring comedians in this country trying to get a big break and SiriusXM Canadais proud to provide them with the opportunity to showcase their skills and get the attention they deserve.”

Sometimes self-doubt, deprecation and awkwardness pay off. On Tuesday night, it did for Eric Andrews, a 23-year-old Toronto-based comic who walked away with the $10,000 grand prize at SiriusXM Canada’s third annual Canada’s Next Top Comic competition.

Sparring with 10 other contestants at Yuk Yuk’s in Toronto, Andrews’ quips about his stepparents, toast and scary movies put him over the top. SiriusXM Canada went through more than 700 submissions to whittle the competition down to 45 semi-finalists. The final 11 contestants were flown to Toronto to compete at the gala in Toronto.

“I think to be a really good comic, first and foremost, you have to be original and bring something new to the table where maybe it will one day revolutionize comedy,” Andrews said. “I don’t know. I’m not saying I do that, but originality is really important.”

Despite being a relative newcomer to the scene and maintaining a part-time summer job on the side, Andrews’ quick success is an anomaly in the otherwise hard-knock world of comedy. “I think in Canada it can be tough,” said Eddie Della Siepe, a fellow Toronto-based contestant. “You’ve really got to hustle and you’ve got to be constantly in motion, improving yourself and your act and working on other aspects of your career. It’s really hard to be a comedian in Canada. You’ve got to be a Jack of all trades.”

For many comedians trying to make a go at comedy full-time, the going is tough. It can take years to gain recognition in the community, and the rewards are often small. Recently, Dominque Pare, another Toronto finalist, traded in his career in the fibre optic data connectivity space so that he could concentrate on his comedy. “I actually quit a very lucrative technology job to make maybe $20k a year as a comedian,” he said. “So if you ever want to know if I love this, yeah, I really love this because I’m dying right now.”

Making the leap and investing time in comedy comes with its rewards too, however, argued Della Siepe. Since beginning his stand-up career in 2001, the comic has shot his own Comedy Now special, toured across the country and performed at Massey Hall.

“There have been times where you say to yourself, ‘What am I doing?’” the comedian confessed. “If I put this time into a doctorate, I could be a physician of some sort. But I love what I do and those thoughts fleet right away and then I realize that I’m not working a job I don’t like, looking at a guy on television saying, ‘That could have been me.’”

There may be fame, but along with the quick glimpses of glory come tinges of regret too. “Oh, I have tons of regrets,” Pare deadpanned. “You have no idea how many regrets I have, but I also couldn’t continue living my life without knowing I at least tried this with all of my heart and everything I can put behind it.”

Pare is giving himself two years. In the meantime, Andrews is still trying to make sense of his motivations. “I don’t even know. I think about it and I’m like, ‘Why am I going to this bar to perform for three people?’” Andrews said. “And then in the end, it’s like I just want to get this joke better. I want to see if somebody will laugh at this joke that I just thought of. It’s this quest to just build something great, I guess.”

Backstage before the competition, Andrews contemplated what he’d do if he won. “Oh boy, I’ll probably buy everyone a drink. Not everyone, but people I know. And then pay off any debts I have, which I have a lot. And then I’ll just party. You know how it is.” he said. “Dreams could come true. I don’t know. I’m living a fairytale.”

What does Andrews mean by fairytale? “I’m not sure,” he admitted. “Maybe I just said that because everyone else was so harsh. I just look at the positive side of it and look at the things I’ve done so far instead of the things I haven’t.”

Andrews’ game plan proved to be just enough on Tuesday night. “My recipe for success tonight is just a tablespoon of charm and then just be myself and just be as funny as I can be out there and hopefully it works out.” 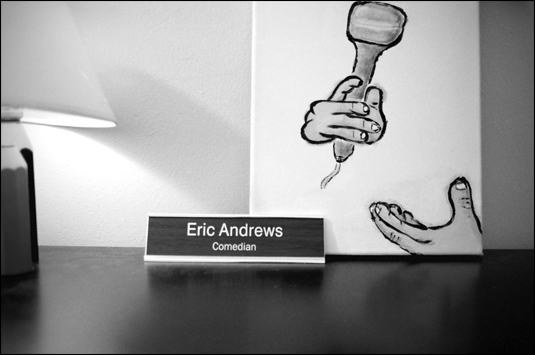